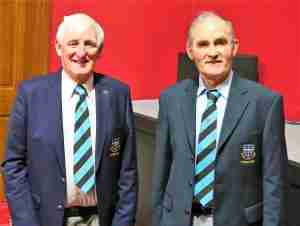 President John O’Sullivan is congratulated by outgoing President Niall Cremen at the AGM. 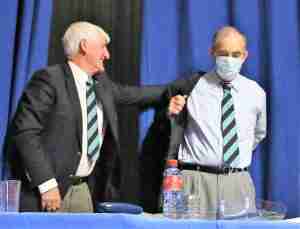 President Niall Cremen presents the blazer to 2022 President John O’Sullivan at the AGM.

President John O’Sullivan is welcomed into office by outgoing President Niall Cremen at the club AGM on Monday, December 6th, held at Fermoy Community Youth Centre. Thanks to Niall for all his work during the year and best wishes to John for the year ahead. 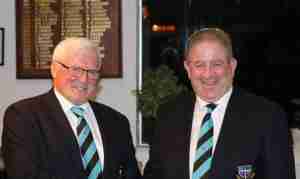 Men’s Captain Gerry Stanton is welcomed into office by outgoing Captain Gerry Keohane after the Men’s Club AGM  at the clubhouse. 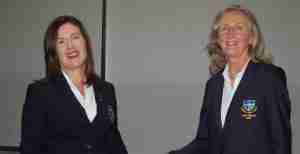 Lady Captain Siobhan Feehan is welcomed into office by outgoing Lady Captain Oonagh Mee after the Ladies Club AGM at the clubhouse.

Thanks to all who took part. Presentation to take place on Saturday, December 4th, at 2pm.

Notice is hereby given that the Annual General Meeting of the Men’s Club will be held in the Clubhouse on Tuesday November 16th @ 7.30pm

Notice of motions and nomination of officers & committee members of the Men’s Club must be made to the Hon. Secretary of the Men’s Club, in writing, at least ten (10) days before the date of said meeting.

Notice is hereby given that the Annual General Meeting of the Ladies Club will be held in the Clubhouse on Monday November 15th @ 7.30pm

Matches to be played by October 31st.

Handicap Allowance: Half the difference between each pairings’ allocated course handicaps. Shots to be taken as per Indices on Men’s Scorecard. 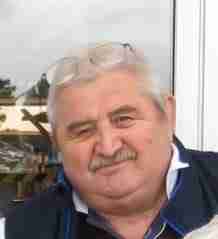 John was a long-standing member of our club who served in many voluntary capacities, particularly as President in 2013.

He had been Hon Secretary of the Men’s Committee for the past four years, having also served in the role previously.

On behalf of President Niall Cremen, Captain Gerry Keohane, Lady Captain Oonagh Mee, Chairman Seamus Feehan and the men’s and ladies committees, we would like to extend our sincere sympathies to John’s wife Eileen, and all the Mulcahy family on John’s passing. He was a true gentleman who loved the golf club and all the people involved with it.

Open to members only